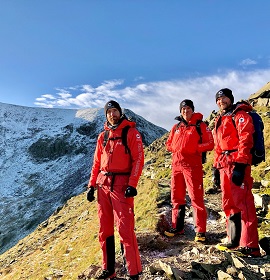 The Lake District’s three Fell Top Assessors met today for the one and only time this winter for the 2021 season launch.

The Fell Top Assessors’ daily walk to the summit of Helvellyn to produce a detailed condition report is a vital safety feature for those who are looking to venture out on the fells this winter.

This key Weatherline service, which has been running for 34 years, will give those heading to the fells all the information they need about the ground and weather conditions that day, so they can #SummitSafely. Full reports and photos are shared on Twitter by the Fell Top Assessors during their mountain hike on @LakesWeather and also online www.lakedistrictweatherline.co.uk.

Jon Bennett – now in his 14th season of being a National Park Authority Fell Top Assessor - added: “The fells tend to be much quieter in winter and you need to navigate more for yourself, rather than following the crowd. The daylight hours are much shorter, meaning you do need to make sure you have the core skills and equipment to be prepared to get back down off the fell in good time.

“We say it every year but the single most important safety message is to know when to turn back. The fells will be there another day and it’s important that you don’t take unnecessary risks and always be prepared to summit safely.”

Wes Hunter, who completes the Lake District National Park Authority’s Fell Top Assessor Team said: “We know how important it is to get outside for your health and wellbeing but we really ask people to make sure they are suitably prepared. The last thing we want to see is the volunteer mountain rescue services having to be called out for something that is avoidable.

“During the season, we’ll also be inspiring people with some stunning wintry photos along the way so that if they can’t get to the Lake District we can give them a flavour of the fells.”

To complement the Weatherline service and daily Fell Top Assessor condition reports, the Lake District National Park Authority is launching a new seasonal safety campaign to help visitors make the most of their time in the Lake District.