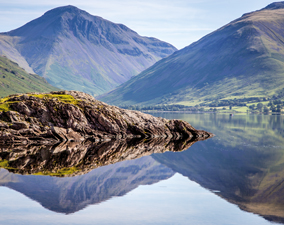 The Lake District has become a World Heritage Site joining iconic locations such as the Taj Mahal, the Great Barrier Reef and Grand Canyon as a place of international acclaim.

Today’s announcement in Krakow has led to jubilation among 25 organisations in the Lake District National Park Partnership who had put the bid together for UNESCO recognition in the cultural landscape category.

Chairman of the Partnership, Lord Clark of Windermere, described the prestigious status as momentous and will bring great benefits for locals, visitors, tourism, businesses and farming. It now joins just over 1,000 World Heritage Sites worldwide.

Three key themes underpinned the bid for World Heritage Site status, recognising the Lake District National Park as a cultural landscape of international significance. These include world ranking examples of identity - the dramatic farmed landscape; inspiration - art, literature and love of the place. This in turn sparked the birth of conservation - people fought and invested to look after this special corner of England.

Lord Clark explained: “It is this exceptional blend which makes our Lake District so spectacularly unique and we are delighted UNESCO has agreed. A great many people have come together to make this happen and we believe the decision will have long and lasting benefits for the spectacular Lake District landscape, the 18million visitors we welcome every year and for the people who call the National Park their home.”

Richard said: “The Lake District is an evolving landscape that has changed over time and will continue to do so. Improving landscape biodiversity and looking after our cultural heritage underpin the Partnership’s management plan which sets out how, together, we will look after the National Park as a World Heritage Site for everyone to enjoy.”

The bid was submitted by the Department for Digital, Culture, Media and Sport and Historic England as the UK’s only submission in 2016. Following the 41st UNESCO committee meeting held in Krakow, John Glen, Minister for Arts, Heritage and Tourism said:

"The Lake District is one of the UK’s most stunning and ancient landscapes and I am thrilled it has been granted World Heritage Site status. It is a unique part of the world, that combines a vibrant farming community with thousands of archaeological sites and structures that give us an amazing glimpse into our past.”

He added: "This decision will undoubtedly elevate the position of the Lake District internationally, boosting tourism and benefitting local communities and businesses."

Locals and visitors across the Lake District are being invited to celebrate the UK’s latest World Heritage Site this weekend by coming together for a Picnic in the Park! Marking the first weekend as a UNESCO World Heritage Site (15 and 16 July) lovers of the Lake District are encouraged to take a trip to their favourite picnic spot, café, garden, fell or iconic lakeside view in the National Park and share their photos using #WeAreTheLakes, which will appear on the World Heritage website. For ideas on where to go this weekend, visit lakesworldheritage.co.uk/picnic

Historic England Chief Executive, Duncan Wilson, welcomed the inscription: “I am delighted that the Lake District has been added to the World Heritage List. This beautiful landscape, which inspired Wordsworth and the birth of the conservation movement, has been shaped by hundreds of years of human interaction with the landscape. World Heritage Site status recognises the truly exceptional qualities of the Lake District and will help to ensure it is looked after and enhances quality of life for this and future generations.”

National Trust Assistant Director of Operations for the Lake District, Mike Innerdale, says: “We are delighted that World Heritage Site status recognises the Lakes as the spiritual home of the Trust and our work to look after it over the last 120 years. The status also celebrates the ever-evolving relationship between people and nature. Whilst the Lake District has an exquisitely beautiful natural environment it is not in universal good health. The WHS bid partnership recognises that we are losing soils, our wildlife has declined and our rivers are in a pattern of repeated flooding. We also agree that we must address this as a matter of urgency, working together and not in isolation of other societal values including farming, culture, access, recreation and tourism.”

Cumbria Tourism Chairman, Eric Robson, says: “World Heritage status means that the Lake District becomes one of just over a thousand exclusive sites with this special stamp of recognition. Being a member of this exclusive club is a fantastic opportunity to communicate with new visitor markets across the globe and to raise awareness of the Lake District’s cultural and environmental assets. Of course, Cumbria already has a large part of the Hadrian’s Wall World Heritage Site, so this additional boost can only re-inforce the county’s already strong reputation as a world class visitor destination.”

Overview of the bid: The Lake District’s bid for World Heritage status was put together by the 25 partners that make up the Lake District National Park Partnership. Inscription is in the ‘Cultural Landscapes’ category. This reflects the three themes that underpin the bid:

Identity: The acknowledged beauty of the Lake District is the result of thousands of years of industry and agricultural development of the spectacular natural landscape of mountains, valleys, lakes and woodland. It is a cultural landscape of international significance.

Inspiration: The beauty of the Lake District inspired artists and writers of the Picturesque and Romantic movements and generated ideas about landscape that have had global influence.

Conservation: The Lake District has been enjoyed and valued by visitors for 250 years. Concern to protect it was the inspiration for the birth of the conservation movement, including the National Trust and protected areas including UK National Parks.

In celebration: Lake District National Park will host a free cultural festival 8-10 September with the theme of ‘cultural landscapes’ in celebration of the World Heritage Site status. Lakes Alive is a weekend of spectacular happenings in unexpected locations in and around Kendal and wider Lake District National Park. Find out more: lakesalive.co.uk