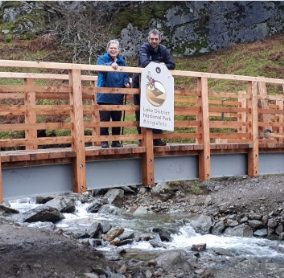 Locals and visitors to Grasmere will be able to walk off that Christmas dinner by completing the circular walk to Alcock Tarn from the village for the first time since 2015.

The popular loop has been reconnected thanks to the rebuilding of Greenhead Gill Bridge, which was washed away during Storm Desmond in December 2015.

The damage caused by the storm meant it was impractical to rebuild in that location so the new bridge is located 90m from the original site.

The construction project was challenging due to its location and all building materials had to be helicoptered in, including the 14m steel bridge beams.

Vivienne Rees who is the Chair of Grasmere Village Society, Councillor for Ambleside and Grasmere and Board Member of Lake District National Park Authority said: “It’s wonderful that the bridge has been reinstated and once again opens up this popular walking route for locals and visitors alike. I know many local families have been watching the progress keenly and are very grateful to all concerned in the planning and building of Greenhead Gill Bridge.”

Bruce Wilkinson, project ranger for the Central and South East area of the National Park said: “We’re proud that the bridge has been designed and built by Cumbrian based businesses and are grateful for the support and assistance of local land owners and residents in the project.

“We’re very pleased that the bridge has been rebuilt as we know how important it is to the local community and are thrilled it’s opened in time for Christmas.”

This work was carried out as part of the Government funded £3 million Routes to Resilience Programme to repair the damage caused by Storm Desmond, improve accessibility and strengthen resilience to the impacts of flooding in the future.

Since January 2017 91 bridges have been reinstated or repaired, 65 paths have been restored and 43 gates, stiles and signs fixed.