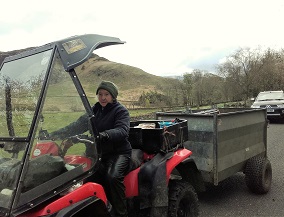 A plea has gone out to dog owners to keep their pets under control around livestock as the lambing season reaches its peak.

The move follows disturbing incidents which, according to Lake District National Park ranger, Val Edmondson, could be avoided with a bit of care and common sense.

Although most dog owners take great care around breeding livestock and wildlife, the thoughtless minority can cause havoc, explained Val.

She added: “We recently had a case in Ullswater where a very well-bred, valuable Herdwick ram was mauled so badly it had to be put down.”

Owner and respected breeder, Jean Wilson, was distraught, explaining she had bought the young breeding tup for 1,000 guineas in autumn to improve her pedigree flock.

She said: “It was heart-breaking, particularly as it should have had its whole life in front of it. The vet bill was £400, not to mention disposal costs.”

Val said the case proved rams were just as vulnerable to attack as pregnant ewes and lambs.

She added: “It was one of a number of mindless actions from dog owners at this precarious time. Sheep worrying can and does have horrendous consequences, both for the farmer and dog owners.

“This is a very sensitive and important time. Dogs chasing lambing sheep can cause them to abort and, in the worst cases, kill the ewe. Preferably they should be kept on a short lead around livestock.

“Farmers have reported some sickening cases over the years and ultimately they have the right to shoot out of control pets. This is obviously a last resort, but sometimes they have no other choice.

“Lambing time coincides with ground nesting birds producing their offspring, which are also at great risk from dogs.

“Species such as curlew, lapwing, snipe and grouse have nests disturbed and their chicks scattered. And once away from the nest, their chances of survival plummet. We’ve seen a worrying decline in numbers and must do all we can to protect them.”

By law, canines must be controlled so that they do not scare or disturb livestock or wildlife. On open access land they have to be kept on short leads from March 1 to July 31 – and all year round near sheep. Close supervision is also required on public rights of way.

Val added: “The countryside is starting to come alive with lots to see and do. We want as many people as possible to enjoy it. We just ask that a close eye is kept on dogs at such an important time for our animals and wildlife.”

Photo shows Ullswater farmer Jean Wilson, whose prize 1,000 guinea ram was mauled so badly by a dog it had to be put down.