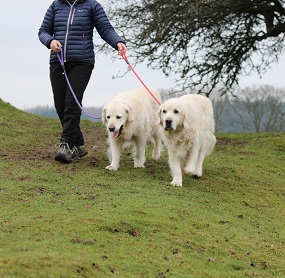 As more people are exploring the Lake District this week during half term, they are being asked to ensure that pet dogs are kept under control as the lambing season gets underway.

Although there may not be lambs in the fields just yet, many ewes are preparing for their arrival and people are being asked to pick up after their pets and to ensure that they are kept under control at all times.

For the second year in a row the National Park is providing lambing signs to local landowners as a visual reminder to dog owners to keep their dogs under close control.

Lake District National Park Farming Officer, Briony Davey says: “The threat of dogs stressing sheep during lambing season is a real concern to farmers as it can lead to injury and even cause the ewe to abort the lamb. So dog owners are being reminded of the Countryside Code, to keep their dogs under close control at all times and preferably on a lead on most occasions.”

Briony concludes: “The Lake District is a wonderful place to be just now with lots to see and do for families, but we just need to remind dog owners in particular to think about how they can affect our wildlife and our countryside at this exciting time.”

Another thing for dog owners to be aware of is the damage dog fouling can cause to sheep and cattle and, as always, they are being reminded to pick up after their pets.

She comments: “As the dogs don’t display any symptoms, owners may not know that they are infected, but any sheep or cattle grazing on contaminated grass are at risk of becoming very ill, which is a worry for farmers.

“It’s a very real problem, as I know of a case recently where 42 sheep were made severely ill from this type of infection, which meant a loss of at least £3000 to the farmer. Treatment to worm dogs is very simple and should include worming for tapeworm to avoid these problems.”

Ken Pears, who farms at Caldbeck Common agrees. He says: “It’s an unpleasant problem that is so easily avoided by dog owners being aware of the issue. Although most dog owners are responsible, there is a minority who put livestock at risk by not picking up after their pet and taking the bags home with them.”

Photo shows dogs on a lead exploring the Lake District.