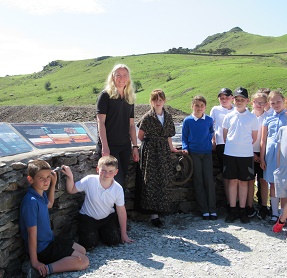 A new interactive ‘hub’ has been unveiled in Coniston today following a two-year conservation project across the mining valley, in a bid to encourage visitors learn more about the town’s mining heritage and explore the site through new walking routes.

Today, a new stone-structure adorned with information panels and housing a sound instillation was unveiled to the public. The celebration event welcomed local residents, stakeholders and school children to see the outcomes of the two-year conservation project. 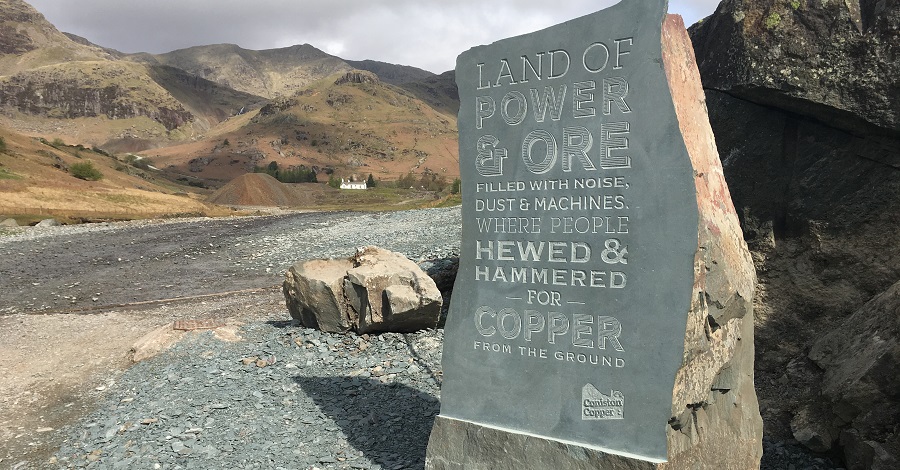 Photo shows engraved slate which marks the place where people first view the Coppermines Valley, referred to as ‘the reveal’. It was engraved by local stonemason Gordon Greaves.

Eleanor Kingston, Lake District National Park Strategy and Partnership Adviser, said: “We’re thrilled to see this project complete and so thankful to the National Lottery and the incredible support from locals which made this vital conservation project possible.

“Community engagement was key to this project and the involvement of local people has been greater than we could have hoped for; from the schools that have embraced the opportunity to teach their children about the local mining heritage, to the locals who have volunteered their time to take on various roles over the past two-years.”

The need for this project came from the mining site being listed on the ‘Heritage at Risk’ register but now, following the completion of this conservation scheme, the site will be removed from the list later this year.

The newly build stone-structure, which is based next to the Coniston Coppermines YHA, was built as part of the Coniston conservation project and as well as displaying information panels detailing the history of mining across the Coppermine Valley, it also contains an interactive sound instillation.

The sound instillation sits within the stone-hub structure and invites people to make sounds of hammering and chains rattling to transport themselves back to the landscape as a hive of industrial activity. Chris Brammall, an Ulverston-based architectural and sculptural metalworker, was commissioned to develop the concept.

Eleanor Kingston added: “One of the roles of the volunteers was to unearth the history of Coniston and that information is now used in the panels at the hub and in education materials available for schools. It was a great opportunity to involve residents with great knowledge of the area and those with a passion for Lake District. They did a great job in piecing this fascinating story together.”

Coniston C of E is one of the local schools to have introduced the Coniston Copper to their curriculum across all ages; from early years through to year 6, and today a number of children and teachers joined the celebrations at the Coniston Coppermines YHA.

John Ruskin Secondary schools joined Coniston C or E in taking on the projects, tasks and materials that have been created as part of the Coniston Copper project. Children have learnt about the history of Coniston Coppermines and also adapted the local heritage across subjects; studying the geology of the mines and the electrolysis of Copper, and even adapted the history into drama performances and created computer games based on the underground mines.

Nicola Blackburn, Teacher at Coniston C of E, said: “The project was really well received and parents have commented to us how much their children have enjoyed learning about the coppermines and being involved in the project. One parent commented after the assembly how they had learned a little more about Coniston Copper….both staff and children have thoroughly enjoyed it.”

These teaching resources will soon be made available to other schools to use, with the aim of continuing to teach local children about the history of Coniston in new and exciting ways.

Eleanor Kingston added: “The community have also been fantastic in supporting the development of walking routes which we hope will encourage visitors to travel to the site during their time in Coniston. Volunteers worked to establish new guided walk routes and also felt that self-guided trails would also be well used by walkers and so they will too be launching soon.”

To book your place on an upcoming guided walk of Coniston Copper, starting in June, at http://www.lakedistrict.gov.uk/walking.