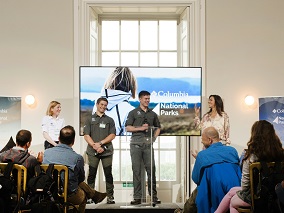 On Tuesday 23 May 2017, Columbia Sportswear and the UK’s National Parks announced a first of its kind five-year partnership, making Columbia the official outfitter of the National Parks’ rangers and staff – the people who protect and promote some of Britain’s best-loved landscapes - including the Lake District National Park.

He added: “This is a fantastic deal for us. It means we’re going to have an extra £50,000 to spend on crucial work in the Lake District. Resources can be diverted to footpath repairs, which after Storm Desmond have been a major issue for us.

“It will also give us extra funding for our apprenticeship scheme, another important area of our work. This deal with Columbia gives national parks the opportunity to spend more looking after our county’s spectacular landscapes for everyone to enjoy.”

Richard said he was delighted that three of the Lake District rangers were the ‘official face’ of the Columbia launch campaign and were invited to talk at the launch event with TV presenter Julia Bradbury, earlier this week.

Rangers and staff are entrusted to conserve and enhance the natural beauty, wildlife and cultural heritage of the National Parks for all who visit. Their efforts range from rebuilding mountain paths to repairing river moorings, and from leading guided walks to educating school children and community groups about the great outdoors. And they undertake much of this work in some of the wettest, most challenging weather in the world.

“At Columbia, our mission is to help people enjoy the outdoors longer. That’s why we consider it our responsibility to be conscientious stewards of our shared environment. Becoming a partner of the UK’s National Parks is an unrivalled opportunity to highlight the amazing work conducted by rangers and staff,” said Andy Barker, General Manager UK & IR Columbia Sportswear.

Containing some of Britain’s most important and beautiful landscapes, the UK’s 15 National Parks (ten in England, three in Wales and two in Scotland) are free to visit and host over 100 million visitors each year. In addition to outfitting rangers and staff and obtaining their valuable feedback on the gear, Columbia will work alongside the National Parks on new initiatives to deepen the public’s understanding of their National Parks and encourage more people to enjoy the outdoors.

Jacquie Burgess, Chair of National Parks UK says, “Columbia Sportswear is showing a strong commitment to the UK’s National Parks with this partnership. Providing clothing for more than 2,000 staff is a very significant contribution, supporting the very heart of our work.  Columbia will take a leading role in helping to increase public understanding of our wonderful National Parks by sharing the stories of our people and our Parks over the coming five years.”

Steve Curl, Chair of National Parks Partnerships LLP, the organisation that facilitates corporate partnerships on behalf of the UK National Parks, says, “We applaud Columbia for this enlightened investment in the UK’s National Parks. This is a high-value partnership, enabling us to focus our resources towards looking after these special places for now and for future generations to enjoy. We have been hugely impressed by Columbia’s environmental and ethical commitments as well as their genuine enthusiasm for the UK’s National Parks and their plan for support over the next five years.”

Columbia will outfit National Park rangers and staff with several performance pieces, including the OutDryTM Extreme ECO Jacket.  The ultimate sustainable waterproof breathable solution for extreme conditions, the OutDry Extreme Jacket is sustainably manufactured without PFCs (Perflourinated compounds)2.  The jacket’s design represents a sea-change in the development of performance rainwear, and signifies an important environmental advance.  For more information on the OutDry Extreme ECO Jacket, go to: http://www.columbiasportswear.co.uk/outdry-extreme-eco