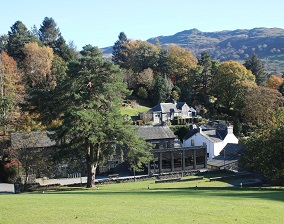 A far-reaching project which has seen the return of 600 students and 57 jobs in the heart of the Lakes has been hailed a regional winner in prestigious planning awards.

Judges said they were ‘very impressed’ with the collaborative approach taken by the two organisations in a £10.5million investment which has boosted the entire community.

It is the authority’s first Planning Excellence award and has been greeted with delight by a team dedicated to working with applicants to achieve sustainable development and the vision for the Lake District.

Area planner, Jackie Ratcliffe, said the university expansion was a showcase of partnership working, which included the community and Lakes Parish Council.

She added: “During the six years we have been working on this project, we have seen a huge boost to Ambleside with the return of so many students and jobs to the area.

“This has been a long-running process of collaboration and co-operation. The campus, which had closed-down, has seen a big revival and is now a vibrant success story in the heart of the community.”

University of Cumbria vice chancellor, Professor Julie Mennell, said: “We are delighted to have worked so closely with LDNP to ensure our Ambleside campus redevelopment is sympathetic to our magnificent surroundings.

“It’s wonderful that our collaborative work has been recognised with this award especially now that the Lake District has been declared a World Heritage site.”The scheme was one of 14 regional contenders considered for awards and now goes forward for overall winner for the North West region which will be announced in Manchester on 6 October.

The RTPI represents over 24,000 members worldwide and shapes planning policy, raises professional standards and are the only body in the UK to confer chartered status to planners, the highest professional qualification.