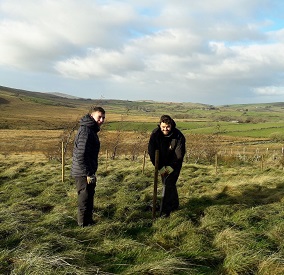 Hundreds of volunteers have been involved in the long-running campaign which began in 2000 and through ongoing planting still continues to give the landscape and biodiversity a significant boost.

Tribute has been paid to all those who have helped make a huge difference in Caldbeck, Uldale and Dash Valley. Lake District National Park ranger, Scott Henderson, said new life had also been breathed into Wet Swine Gill, where a fire started by a discarded barbecue in May 2016 decimated around 500 trees.

He explained: “When it comes to trees, there’s no quick fix. Although the 2,000-plus native species we introduced at Dash Beck and the River Ellen around 17 years-ago are doing well, the more recent additions will take time to get established.

“Creating upland native woodland has to be sensitively planned. The idea was to extend existing wooded gills, or replicate them in a way that would look natural, and provide important wildlife habitat, largely absent from Uldale and Caldbeck commons.

“Although it will take decades for the full benefit to be felt, National Tree Week is a timely reminder of why they matter.”

Scott said there had been huge levels of help over the years, notably from Newton Rigg forestry students, Eden Rivers Trust and Caldbeck Commoners and that support from Natural England and the Wealth of Wildlife was invaluable.

He added: “This has been a great community effort, linking commoners, farmers, local people, major landowners and fencing contractors.

“Everyone has pulled together to work on schemes which will ultimately see the spread of natural woodlands and increase wildlife in very important areas of the national park.

“The work continues. Eden Rivers Trust apprentices planted 250 trees in a single day this month and a further 250 will be planted in December at Branthwaite in Caldbeck.”

Running for over four decades, National Tree Week this year urges people to get their hands dirty and plant around a million new trees. It finishes on December 3.