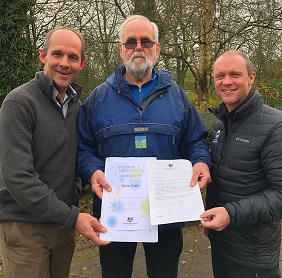 Prime Minister Theresa May has today honoured Barry Capp, from Cumbria, for his work with the Fix the Fells programme, maintaining over 2,000km of footpaths across the Lake District.

Barry has been volunteering with the organisation for nearly a decade, accomplishing 2,000km of work in over 1,000 days, and earning himself a prestigious volunteer award from the Lake District National Park. As well as repairing and maintaining the network of paths, Barry has been instrumental in developing the volunteer scheme into the great success it is today and is also the volunteer representative on the Fix the Fells Partnership Board. His volunteering is providing an invaluable contribution towards the enjoyment of the UK’s latest World Heritage Site.

Barry is the latest recipient of a Point of Light award, which recognises outstanding individual volunteers, people who are making a change in their community and inspiring others. Each day, someone, somewhere in the country is selected to receive the award to celebrate their remarkable achievements.

In a personal letter to Barry, Prime Minister Theresa May said:

“Your extraordinary work for Fix the Fells has been crucial in restoring paths across the Lake District and I hope you feel a great sense of achievement in completing 2,000km of repairs in over 1,000 days of volunteering. By not only working on fixing footpaths but also leading tours and volunteer training workshops, you are making a significant contribution to sustaining the Lake District’s status as a National Park and as a newly designated World Heritage site.”

Rory Stewart, MP for Penrith and The Border, said:

“I'm delighted that Barry Capp's work over nearly a decade as a volunteer for Fix the Fells has been recognised by the Prime Minister in the Points of Light awards, and send him all my congratulations. Fix The Fells is a fantastic organisation, where volunteers like Barry brave the elements to maintain our local footpaths. I know that Barry has been pivotal to helping Fix the Fells recruit and train its 100 volunteers as well as fixing over 200 sections of Lakeland footpaths, and scheduling another 120 sections in the coming years. I am extremely proud to offer him my sincere thanks for all the work he has done."

"I feel most honoured and very proud to have been selected for this prestigious award in this our 10th anniversary year of the Fix the Fells volunteer lengthsmen scheme. Fix the Fells is a collaborative partnership programme and is a real team effort with both staff and volunteers working very closely together to maintain and repair the upland fell paths of the Lake District. The award was a total and absolute surprise!"

Regardless of whether it’s a doctor restoring local monuments in her free time, a father teaching young people life skills, or a local musician giving a voice to lonely people, the Point of Light award honours shining examples of volunteering across the UK.