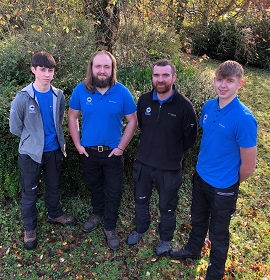 Jack Aberley from Lancashire is working with the northern team. A joiner by trade, Jack decided he wanted to put his skills to a more ecological use and has enjoyed bridge repairs and installing signposts and waymarkers so far.

He says: “I have worked on building sites for years but decided that I wanted to give something back to the environment I love. I feel very lucky to be able to call the Northern Lake District my office and look forward to enhancing my skill set.”

Jed Porter and Ant Murray have joined the Central Ranger team. Jed knows all too well about what the role of a ranger entails as his dad is a field ranger with the Lake District National Park and has worked on many major projects.

Ulverston based Jed says: “I’ve grown up helping my dad out, and I decided that I’d love to follow in my dad’s footsteps. I’ve enjoyed learning more about the natural environment and improving on my dry stone walling skills.

The pandemic also gave Ant Murray an opportunity to re-evaluate his career path. After running pubs for over a decade he decided that he wanted to up sticks and move to Penrith and give something back to nature. He said: “Like a lot of people I have re-evaluated my life and decided I wanted to move to a place I loved and do something worthwhile and was important for the environment as climate change is a real concern of mine. So far I’ve enjoyed speaking with the public and letting them know how they can help us look after the Lake District.

Jake Wood is now working with the Southern team after his course at college was cancelled due to the pandemic. Coming from a farming background, Jake can’t wait to expand his skillset and learn the ropes of becoming a National Park ranger.

The newest recruits are starting their level two Countryside Worker apprenticeship which lasts 12-18 months and includes six weeks at a college in York where they learn all about wildlife, trees and invasive species, landscapes, health and safety and law.

This coupled with the hands on work they are undertaking in the Lake District means they get a well-rounded idea of what it takes to be a successful ranger.