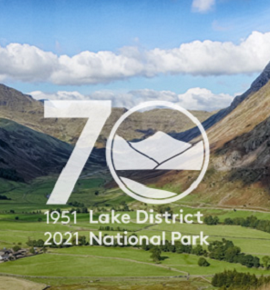 This week marks the 70th anniversary of England’s largest national park – the Lake District - formally designated as the UK’s second park for the nation on 9 May, 1951.

This anniversary follows a year in which people have appreciated open spaces and nature more than ever, as a result of the Covid-19 Pandemic, according to Lake District National Park Authority Chief Executive, Richard Leafe.

Richard says: “This last year has shown us how much people value this protected, national landscape and how important it has been for everyone’s wellbeing. This National Park is home to flourishing wildlife, incredible landscapes and culture and thriving communities - over 41,000 people live here and 19 million visit each year. It’s a place that’s loved by millions and cared for by many.

“This anniversary is a chance to reflect on highlights from the last seven decades, and to look ahead too,” continues Richard.

“National Parks were created to protect iconic landscapes and to ensure they’re accessible to everyone – something that’s hugely relevant 70 years on. Our focus will continue to be on ensuring this is a place for all visitors to enjoy. We’ll also be tackling some of the major challenges facing society, such as climate change to nature recovery,” adds Richard Leafe.

“And all this can’t be done without the expertise and local insights of Authority staff, our members and incredible volunteers. From planners to rangers and visitor services teams to specialist advisers who engage with our farmers and local communities – we’re working hard to protect the future of the National Park and ensure it remains a Lake District for everyone.”

The National Park birthday celebrations will continue through to August when the National Park Authority marks another milestone, 70 years since it was founded and work began to begin looking after this special place.

Some of the key achievements over the last 70 years include: