This imposing building now houses our Keswick Information Centre. The present Moot Hall is dated 1813, but there was a building on the site long before the beginning of the 19th century.

In February 1572 Keswick was at the centre of the area's copper mining industry. Richard Dudley of Yanwath was appointed copper collector by Queen Elizabeth. He was instructed to: "Weigh, mark and coin the copper for a fee of 3s. the cut". He needed a base to carry out his duties and settled on the building in the Market Square.

He wrote to William Cecil, Lord Treasurer and Secretary to the Queen: "I have, for a store house to be made, taken of Lady Ratcliffe of the Isle of Derwentwater, an old court house situate in the middle of Keswick and have agreed for the same to hold it 8 years till her son shall come to full age; paying the sum of 10s. rent for the same. The house is in ruins and must be repaired and ordered for the better service, which I will husband the best I can ... I would have built a new house which so much spending to be done seemed not necessary.”

There was some spending to be done however. The bill for repairs totalled £93 5s 6d, with the wallers claiming the main item of expenditure: "Pulling down of the old house and getting stone meet for their labour £20".

The history of the Moot Hall is patently one of ruin and rebuilding. An entry in the Crosthwaite parish registers for 1657 records the burial of a certain William Munkhouse. Tradition has it that he was drowned between Lord's Island and Friar's Crag. His boat was overloaded with stones for building "the first Town Hall in Keswick", and sank.

A few years later, a 1664 lease refers to "One certain house situate and standing in the middle of the said Towne of Keswicke belonging unto the said Sir Francis Radcliffe, commonly known by the name of Courthouse or Moot Hall".

It wasn’t everybody’s favourite building. William Hutchinson, writing in the 1790s, condemned it as a piece of uncouth architecture. Not that he thought much of Keswick; he found it a place of low and meanly built houses with "the best part of the town obstructed by a gloomy and ugly shambles and a town house".

These shambles disappeared in 1818. Robert Southey, writing to his friend Wade Brown in 1818 not only reports the removal of the shambles but also passes judgement on his fellow citizens.

"The town of Keswick", he writes, "is much improved by the demolition of the shambles. It stands as much in need of moral and magisterial improvement as ever".

The present Moot Hall, dated 1813, was erected at a cost of nearly £1,200 by trustees of the Royal Greenwich Hospital. They took over the sequestered estate of the Radcliffes after the 1715 Jacobite rebellion.

Records show that in the 1820s the lower floor was used as a market for meal, butter, eggs and poultry. Upstairs, the Moot Hall continued its traditional function as a court house. Here the Lords of the Manor, the governors of Greenwich Hospital, considered claims and arguments over land and tenure.

Models and a museum

By 1840, the hall housed Flintoft's Model, still on exhibition at the Fitz Park Museum. Constructed in 1837 on a scale of three inches to the mile, this relief map measuring 12 feet by nine feet showed all the main features of the Lake District.

In 1873, the Keswick Literary Society - now the Lecture Society - resolved they "should take steps to form a museum". In 1878 Flintoft's Model came up for sale, and was bought for the museum for £160, remaining in the Moot Hall. The Society's collection of rocks and minerals, birds and butterflies was moved from the Battersby Hall to join with it to form the Keswick Museum of Local and Natural History. This attracted an increasing number of visitors.

In 1896 the Town Council bought the Hall from the then Lord of the Manor, Mr. Marshall, and gave notice to the Lliterary Society that the museum must be moved. Fortunately, the Fitz Park trustees agreed to its incorporation in the proposed Hewetson Memorial in Station Road, and the museum took over new purpose-built premises in 1897.

The Moot Hall has several enigmatic features, as well as being the focal-point of the town and a grade II listed building:

Into the 21st century

The Moot Hall continued its functions as a market-space and meeting-place until recent times. Improvement and restorations in the 1970s saw the Tourist Information Centre occupy the ground floor, with function rooms on the two upper floors.

In 2000 the Lake District National Park Authority leased the entire building from Allerdale Borough Council, when it was completely renovated to form the much larger Keswick Information Centre.

From an original article by George Bott, (Lake District Herald 1995).
Edited and revised by Jeff Parker, 2012.

"Men working on a face lift for Moot Hall have been spooked by a ghost in the tower. The first sighting was reported by a labourer sweeping up in the corner of the tower. He said the atmosphere went cold and when he looked around, he saw the dark shadow of a man disappearing through the wall. Then a colleague who had volunteered to go back up into the clock tower with him felt a hand on his back as he was descending the last flight of stairs."

When the Market Square was being paved, contractors uncovered a well close by the south wall outside, on 8 January 2003. The existence of the well was previously unknown and there is no clear indication of when it was constructed. The structure of the well appears to go underneath the Moot Hall which was built in 1813. This would make the well at least 200 years old.

The well is nearly two metres wide and at least nine metres deep. It seems to have been built from stone from the river and is perfectly preserved. A cap has been placed on the well. 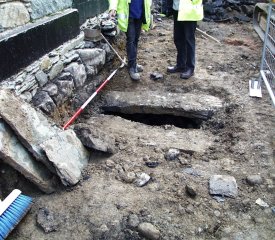 This page is brought to you by the staff of Keswick Information Centre.

We can help you with booking accommodation, tickets or attractions. See us in Moot Hall in the Market Place, home to Keswick Information Centre.