We've teamed up with the Duddon Valley Local History Group to continue and complete the excavation of a Bronze Age ring cairn at Seathwaite Tarn. The excavation forms part of the Ring Cairns to Reservoirs Project.

Despite the very unseasonal wet weather, the excavation is off to a flying start. John Hodgson, the LDNPA Senior Archaeologist, leads the excavation, assisted by Alastair Vannan from Oxford Archaeology North. The excavation team includes five students from Durham University but the majority of volunteers are members of the Duddon Valley Local History Group.

So far we have established our excavation base and begun to take the turf off the large ring cairn. We have also established a site grid to help record what is uncovered. 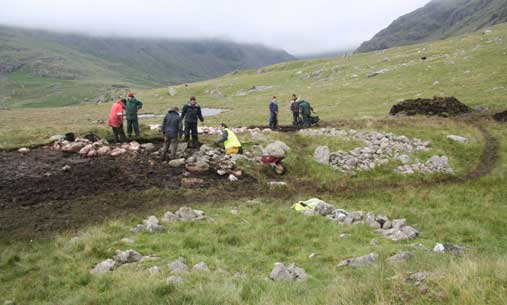 Photo: Small ring cairn in foreground and large one being de-turfed

Luckily the weather has improved and we have had some dry days this week. We have now removed all of the turf and topsoil from two quadrants of the main ring cairn and have started planning the archaeological features that have been revealed. 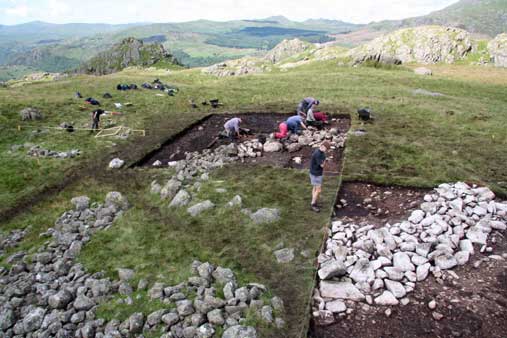 We have also started to remove the turf from the small ring cairn to the west of the large cairn and we are hoping to find out if they were built and used at the same time.

Another part of the project involves investigation of the vegetation on the site during the Bronze Age. We are taking cores from boggy areas near the site to examine the pollen that may survive. This will help us to understand the past environment at Seathwaite Tarn. 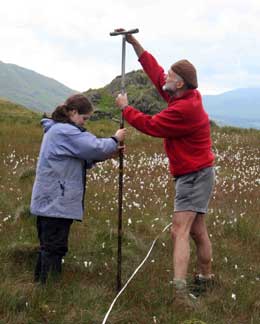 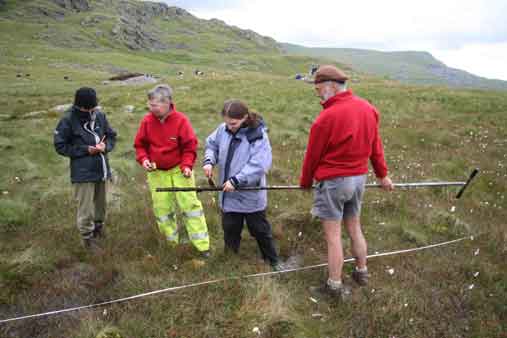 In 2003 survey work by Peter Rogers, a former Area Manager with the LDNPA, identified an formerly unrecognised group of circular stone-built monuments in the Lake District fells. The locations of about 30 of these sites have been recorded and added to the Sites and Monuments Record, but nothing was known of their date or function. It was thought that they might be medieval shielings, which are fell pasture settlements used in the summer, or prehistoric ring cairns.

A small sample excavation was carried out in May and June 2003 on an example of this group located close to Seathwaite Tarn in the Duddon valley. A shard of pottery found during the excavation dates the site from the early to mid Bronze Age. The monument is thought to have been used for ritual purposes, possibly including burial. This information is extremely important, as known prehistoric activity in the high fells was previously limited chiefly to the Neolithic stone axe quarries in Langdale. We now know that there is a significant distribution of Bronze Age monuments in the fells and it is highly likely that many more remain to be discovered.

Although the excavation was successful in confirming the significance of these sites, more work remains to be done and we are investigating ways of carrying out a further season of excavation.