In 1999 two major new archaeological sites were found in the Ullswater and Langdale valleys. They have added significantly to the evidence for early prehistoric activity in the area.

larger image The carvings comprise a series of 'cups' and linear markings created by pecking away the rock surface. The cups vary in depth and include both shallow and deeply worked examples. The majority appears to have been arranged in lines and some are joined together by pecked grooves. The bedrock has several large natural cracks running through it that have been enhanced by pecking, and other linear grooves have also been added.

The association of cups and linear grooves is very reminiscent of the rock art that has been recorded in County Durham and in the northern area of the Yorkshire Dales. It is therefore likely that the Ullswater example is connected in style to this group and indicates contacts to the east. 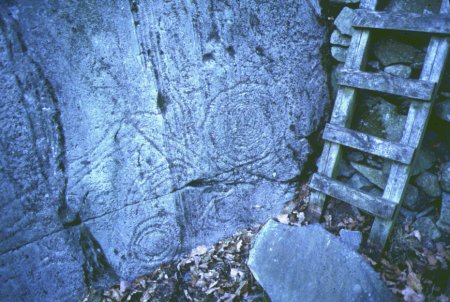 Comprises a series of concentric circles and possible spirals together with other linear markings. There are also possible cup marks but some of these may be natural geological features.

The Langdale example is similar to rock art styles in Ireland and southern Scotland and indicates contact around the western seaboard. Rock art of this type used to be dated to the Bronze Age but it in recent years research has demonstrated that it originated earlier, in the Neolithic (late stone age) period - c. 4000 - 2500 BC. This indicates that the central Lake District valleys may have been settled much earlier than had previously been thought.

These examples are very important because of the style of decoration, excellent preservation and because they are first major examples in Cumbria not associated directly with other monuments such as stone circles.

It is impossible to know precisely what was intended or signified by these early carvings. Many theories and explanations have been put forward, including use in religious ceremonies, primitive maps,and representations of the stars. Explanations, based on extensive examination of rock art sites in different areas of Britain, centre on the landscape positions of the sites and a possible function as territorial markers.

Whatever the original purpose of the carvings, they have an intrinsic beauty and mystery that will continue to fascinate people and act as a spur to further research and investigation.