The chemical compound lime has had a major role in shaping the Lake District, by sweetening acidic soils and improving fertility so fells could be turned into farmland. It was also used to whitewash houses, bind and render stonework and to decorate walls and chimneys.

Lime kilns are scattered around the National Park. Many of the surviving ones are testament to functional beauty and efficient design.

A recipe for lime

For a ton of lime you will need:

Whitewash, or limewash, is lime mixed with water. Every time a house was painted new whitewash had to be applied.

Tallow or boiled oil was added to make the mixture waterproof, ochre or raddle was used to make it red, and blue limewash was used in larders to ward off flies.

The main exterior coat was render - a protective coat of lime and pebbles - and animal hair and sand were often added.

Did you know that:

Kilns in the limelight

Early kilns were hollows in the ground where limestone and wood were piled up, turfed over, then lit to burn out, leaving little trace. Gradually, kilns became efficiently shaped and pot-lined to suit new fuels like peat and coal. In their heyday kilns evolved into multiple stone-built ovens which could be left burning for weeks.

The building of the kilns boomed after the arrival of coal on the Lancaster to Kendal canal and railways. Kilns sprang up along the main bands and outcrops of limestone near Kendal, Penrith and the Coniston Limestone band.

Kilns varied from commercial kilns to farm and field kilns built close to where lime was needed.

A selection of kilns in the National Park

Owned by the National Trust, this eighteenth century gem is built from local slate.

This trapezium was built into a bank from dressed limestone blocks and iron beams for support. A fire brick lining ensured it didn't burn itself up!

This eighteenth century kiln made use of abundant building material and a natural slope. The back ramp is where fuel and limestone was carted up. 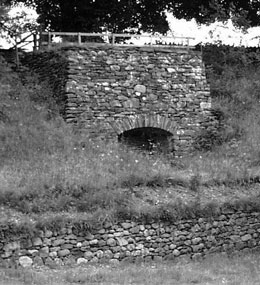 The shape of the arch and internal design dates this farm kiln to the late eighteenth century. This kiln made lime for the local community and used on a part-time basis by labourers, as and when there was a need.