The earliest reference to a bloomforge (water-powered iron smelting furnace) at Cunsey is an agreement in 1623 to purchase woods for the supply of charcoal. The forge was owned by William Rawlinson or John Machell until the formation of the Backbarrow Company in 1711. When the lease expired in 1715, the forge was taken over by the rival Cunsey Company. They reconstructed the forge and worked it as a refinery in conjunction with its furnace, a short distance downstream on the shore of Windermere. In 1750, both sites returned to the control of the Backbarrow Company. However neither was worked again and the forge was partly dismantled in 1760 and demolished in 1800 (Fell 1908, 191-3). 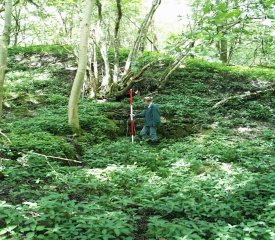 The forge stands on the Cunsey Beck by a silted-up pond created by building a 2 metre high dam across the valley bottom. The stream has broken through the northern end, but close to its southern end is the headrace to the forge. The forge itself has been lost, but its wheelpit can be identified close to the track up the valley.(See Fig 1)

Large slag and waste heaps fill the valley bottom below the dam, while beside the track is a series of ruined stone buildings associated with the forge. The principle remains are of a two-storey terrace of three single-fronted cottages, two rooms deep, radically altered on conversion to a barn, 17m long and 7.5m wide. This is now represented only by the rear wall and one end wall (Bowden1990, 68).

In June 2002 the local Ranger informed the our Senior Archaeologist that the standing building remains at the Cunsey Beck Forge, on the west side of Windermere, had been partly demolished. A visit indicated that significant and fragile archaeological deposits had been exposed and that the site was of greater importance than had been recognised. A further visit with English Heritage's Monument Protection Programme adviser on the iron industry confirmed the Senior Archaeologist's view. The site is now being recommended for scheduling, as in statutory protection.

English Heritage's regional Inspector of Ancient Monuments agreed to a offer a substantial grant for rescue investigation and recording and consolidation of the building remains. The investigation and recording element of the project is being undertaken by Oxford Archaeology North (formerly the Lancaster University Archaeological Unit) and the work started on 20 January. 2003 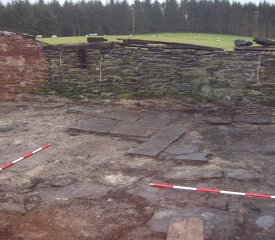 Figure2General view of the site 24 January 2003

The demolition rubble has been removed from the site and the surface has been cleaned by hand.

Fell, A. 1908 The Early Iron Industry of Furness and District.  Ulverston: Hume Kitchin