The Lake District has milder winters and cooler summers than would normally be expected at this latitude, between 54 degrees and 55 degrees north. This is due to the influence of the sea, particularly the Gulf stream. The weather is generally wet and mild. We also have periods of hot dry weather and cold spells with snow and ice. There is evidence that global warming is starting to affect our climate.

Why does it rain so much in the Lake District?

The prevailing westerly winds cross the Atlantic Ocean picking up large amounts of moisture. The air hits the Lake District hills and is forced to rise where it cools and the moisture condenses to form rain. This is called relief or orographic rainfall. 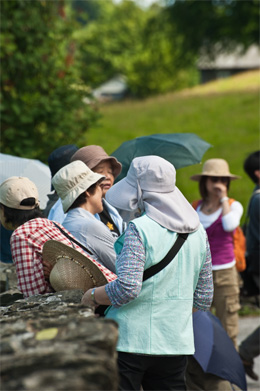 The Lake District climate is both a benefit and a disadvantage for tourists and the tourist industry. Naturally most visitors would like to have dry, sunny weather on their holiday. But the rain is what gives us the lush green valleys and feeds the lakes and rivers.

The weather may put off some visitors but the ones who come spend more money on wet days when the shops, cafes and attractions are more appealing.

Luckily the weather changes so frequently that most visitors get a mixture of good and bad weather on their trip.

Farming and the climate

The main agricultural use of the land in the Lake District is sheep farming. The weather plays a large part in this. Plants have a short growing season from mid April through to November due to the temperature. This makes growing of arable crops very difficult. The steep rocky terrain also makes access to the land difficult for modern farm machinery. Hill sheep however are extremely hardy and can tolerate the changeable weather.

The famous Herdwick sheep thrive in this environment. They have the unique ability to return to the farm where they were born despite being left to wander on the unfenced fells during the summer. They can even survive snow storms due to their thick fleeces.

The climate, together with the geology of the area has made the Lake District what it is today. In the last 2 million years a series of ice ages have left the area buried under glaciers. These rivers of ice carved deep lakes and u shaped valleys between the hills. If you look at a map of the Lake District you can see how the long, narrow lakes radiate outwards from the high mountains of the central area.

The combination of landscape and weather also provides opportunities for renewable power generation such as wind farms and hydro electric schemes. Large scale schemes are considered inappropriate for a National Park. Micro generation schemes are already being run successfully.