It’s National Bike Week (8 – 16 June) which celebrates the health and environmental benefits of cycling and is encouraging people to get out on their bikes. For many cycling is a very popular way to enjoy the fantastic Lake District scenery, but for some the prospect of cycling on some of the Park’s hillier terrains can be a bit daunting. However, guest blogger Connie from West Cumbria is encouraging people who may be hesitant to try out two wheels to test an ebike. She is currently writing a guide to Lake District ebike routes for everyone to enjoy.

Cycling in the Lake District has always been a big and inspiring part of my life. As age and injury eroded my fitness, favourite rides started to feel too long or too steep. I was walking up hills, enjoyment was turning into endurance. I was resigned, these things happen as you get older don’t they? So I found flatter routes but missed the exhilaration of getting right into the fells and the wonderful reward of a swooping downhill. Then I hired an ebike for half a day. That was it, I was hooked.

Now, four years and 30,000kms later I still marvel at what it has given me. All the old favourites are mine again along with routes I never felt fit enough to tackle. No hill is too steep and it doesn’t matter how many there are. Traffic seems less menacing, the wind doesn’t stop you and even rain can be defied by upping your power level so you get back sooner.

I was always a bit wary of off road routes but now bridleways that felt too loose and skittery are easy with a bit of power to keep you going.

One of the big surprises has been how much fitter I have become. Like many people I misunderstood how an ebike worked. I thought it took all the effort out, but that is to confuse it with a motorbike. Sure it has a motor and it is a bike but getting it to go is a joint effort.  I do about eighty percent of the work with my motor adding the empowering last bit when I need it. It’s like having the wind at your back all the time.

Ebikes have different power levels so you can get as much help as you feel you need at any point. The lower the setting you use, the more effort you need to put in and the longer your battery will last. On a ride of 25 miles with a few steep hills that add up to 700 metres of climbing I will use around half of a 500Wh battery. A longer ride with fewer hills would typically use half that.  Even if you manage to use up all your battery you still have a bike you can pedal, so will never be stranded.

Another surprise was people telling me I was cheating. This strange judgement often came from motorists rather than other cyclists.  They have a point, I am cheating age and creeping unfitness. I have regained something I thought was lost, the sheer joy of Lake District cycling.

Get on your bike 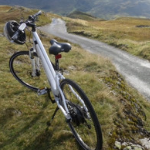 Cyclist, writer, convert to ebikes. Writing guides to routes all can enjoy twitter.com/ebikeroutes