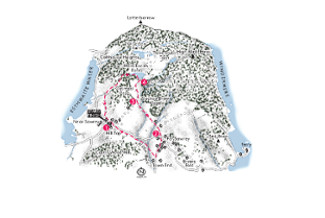 Beatrix Potter originally visited the Lake District on family holidays. She became familiar with the low fells around Near and Low Sawrey whilst staying for the summer at Lakefield House (aka Ees Wyke). She purchased Hill Top Farm in 1905 funded by royalties from the sales of her much loved illustrated children’s books. She then when on to purchase other farms around the area; in part to satisfy her interest in sheep farming and also because of her concern for conserving the traditional Lake District landscape. At the time there were few planning constraints and over development and the potential of urbanisation was starting to become an issue. Her property purchases where gifted to the National Trust for their continued care and management. This walk takes in many of the locations that provided inspiration for many of the settings and characters in her books. For example Moss Eccles Tarn with its abundant lily pads is the likely setting for Jeremy Fisher’s home, and undoubtedly the Tower Bank Arms are the backdrop for The Tale of Jemima Puddle Duck. 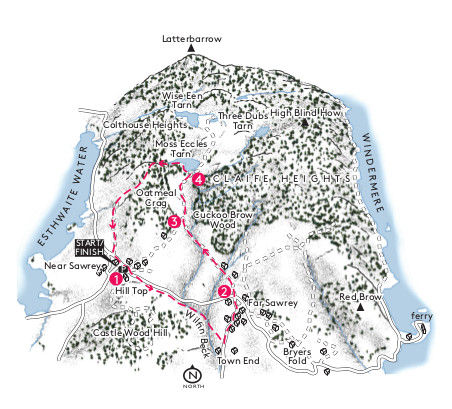 Start/finish National Trust Car Park, Near Sawrey GR SD369956. Parking here is only for visitors to Hill Top so you will need to park further away and walk to the start point.

Terrain Tracks and paths through woodland and low fells.

SD372967 From the embankment beside the tarn head left round the south side and join a path through a gate. The path is on a boardwalk around the edge and is followed to a stile. Follow the way-marked path up the rough pasture and then down other side to eventually reach an access track. Join the